On Thursday, November 14th, Citizens Bank announced a $125,000 investment in our nationally-recognized job training program, the West Philadelphia Skills Initiative (WPSI), in support of our expansion efforts. Citizens Bank’s substantial investment in WPSI is one of the largest the bank has made in Philadelphia. Since 2012, Citizens has contributed more than $450,000 to the Skills Initiative through its Citizens Charitable Foundation, representing the long-term commitment the bank has made to give back to the communities it serves.

“Citizens Bank is committed to increasing workforce development opportunities in the Greater Philadelphia region, and few organizations have the track record of the team at the West Philadelphia Skills Initiative,” said Daniel K. Fitzpatrick, President of Citizens Bank, Mid-Atlantic Region, to a group consisting of UCD and Citizens leadership and members of a Skills Initiative cohort training for positions on the University of Pennsylvania’s custodial staff. “We are proud to support the organization as it takes its efforts to the next level, providing more opportunities for unemployed Philadelphians to get the training and support needed to succeed in the workforce.” Fitzpatrick went on to call the participants “the future of Philadelphia,” concluding that we as a city are only as good as our neighborhoods. 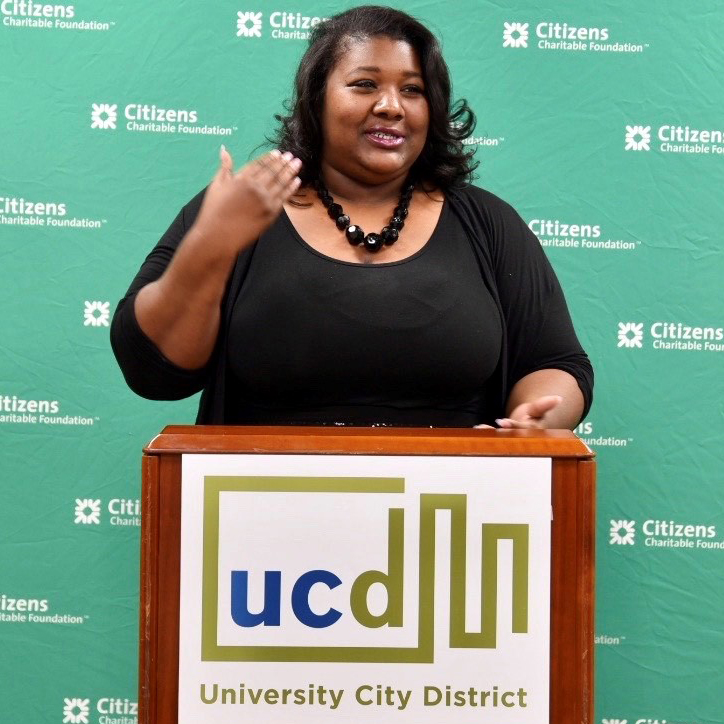 In speaking about her experience with the Skills Initiative, program graduate Jacquelyn Saunders commended the program. “I used to have to wait to achieve my dreams,” Saunders said. “Now they’re attainable. The program touches us as individuals, our families, and our communities.” She pledged that she will now walk right through every door the program has opened for her.

Following further remarks by UCD Board President and Penn Executive Vice President Craig Carnaroli, UCD President Matt Bergheiser, and UCD Vice President for Workforce Innovation Sarah Steltz, Dan Fitzpatrick presented a ceremonial check representing the gift to the assembled group. Staff from Citizens then had an opportunity for a discussion with members of the Penn custodial training cohort to learn firsthand about their training process and career goals. Later that day, the cohort finished its four-week training with a closing ceremony. They have begun interviewing for positions, and we look forward to sharing stories of their successes in the near future.