There are no typical days at the West Philadelphia Skills Initiative, University City District’s workforce development program that’s been connecting unemployed West Philadelphians to jobs with major local employers since 2011. Throw a dart at a calendar and a given day may feature on-the-job training with a future employer, a presentation on financial literacy, or mock interviews designed to prepare participants for the real thing with a potential employer. Is it a Friday? Eleven times a year participants celebrate the end of their programs with a closing ceremony that includes a vision exercise where they explore where they were when they entered the program, where they are on the final day, and where they see themselves in six months or a year. These are great days, full of smiles, hugs, and a few tears as people leave our program and get ready to start new jobs after months or even years of unemployment.

When Matt Bergheiser joined UCD as executive director in 2009, he was presented with a unique opportunity: the West Philadelphia Partnership was wrapping up, but Penn was still committed to the idea of a program that connected local West Philadelphians to jobs.

“We decided to explore what it would take for an organization like UCD to organize a partnership around connecting people to jobs,” Matt explains. “So we set off on what we thought was a one-year planning exercise that pretty quickly turned to action and impact.” Encouraged by Ira Harkavy from the Netter Center and Craig Carnaroli, Penn’s Executive Vice President and UCD chairman, UCD’s board voted to deploy remaining resources from the West Philadelphia Partnership to run a two year pilot around job training and workforce development.

Over the next year, UCD received support from the Job Opportunity Investment Network (JOIN) to hire a director of the Skills Initiative and funding from Philadelphia Local Initiatives Support Corporation (LISC) for operating the first program. Then it was time to find that director.

“The best decision we ever made was the first one – to hire Sheila Ireland,” says Matt.  “We had a vision, we had a set of principles, we had an amazing set of partners in place, but it really needed someone to come on and wake up every day thinking about how to mold and shape this program. We needed someone to drive the car, and that’s what Sheila brought.” Sheila Ireland is a force. She can be a no-nonsense, serious leader making the pitch for our approach to workforce development on a national stage, or the person in UCD’s office with the loudest, most infectious laugh who routinely slaps tables when she hears a joke she likes.

“WPSI found me,” Sheila explains. “A friend of Matt’s called me about a wonderful opportunity, and said I think you’d be really interested.” Sheila came to UCD with extensive HR, organizational development and leadership experience, which collectively shape her unique approach to job training.

As Sheila explains it, her initial charge was to do something about unemployment in West Philadelphia by leveraging UCD’s partnerships with the major University City institutions. Sheila came on board on June 2nd, 2010, and immediately set to understanding the greater neighborhood of West Philadelphia. “Getting to WPSI, I really didn’t understand the gulf between the institutions and the residents that we talk about now. My journey has been about proving to both sides that there’s value on each side of the fence.”

If you’re unfamiliar with the model, WPSI harnesses the hiring power of local institutions like Drexel, Children’s Hospital, the University of Pennsylvania and others, and trains unemployed members of the community in a unique, employer-driven strategy that adds value to both jobseekers and employers. WPSI works with institutions on specific hiring needs, and launches new groups of trainees, or cohorts, only when the employer has a guaranteed number of open positions. The program provides both soft and hard skills aimed at both the specific job opportunity with the employee partner, and also a greater career trajectory. 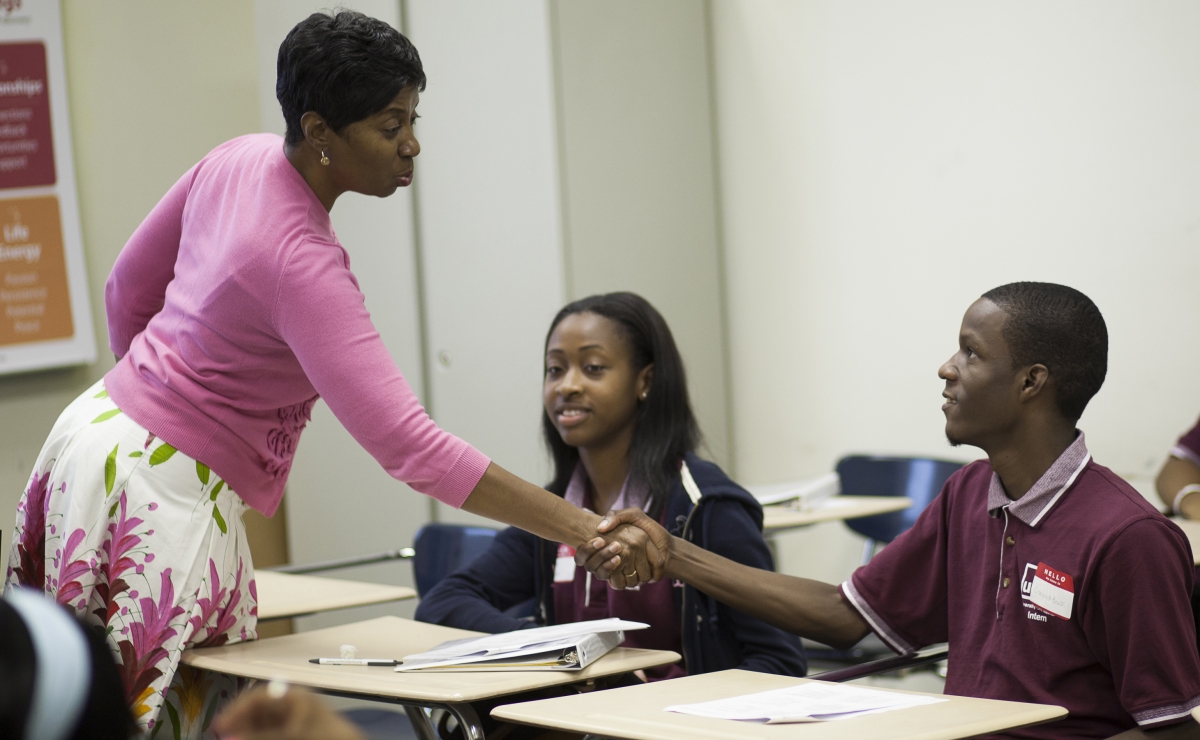 But it took some time to arrive at that model. When Sheila started, UCD ran a summer jobs program focused on keeping high school students busy by cleaning up lots in the neighborhood. When an opportunity arose to train local high schoolers for positions with Penn Medicine, she jumped on it.

While UCD committed to paying the students a wage subsidy during the training, Penn agreed to hire the students as full-time interns. Together, we embarked on a program that helped prepare high school students for meaningful employment in STEM positions.

This model was then duplicated with adults: we start by finding a partner looking to fill positions, then we recruit unemployed West Philadelphia residents of and offer them a performance-based stipend during their training, and finally we guarantee an interview with the employer partner at the conclusion of the program. This model has led to over 90% of the Skills Initiative graduates obtaining jobs with the employer partner or other employers. The success of this approach has led to significant growth each year.

“Frankly, we’ve been accelerating,” Sheila says. “If everything works out the way it’s supposed to, we’ll serve 175 people this year. We now have over 700 West Philadelphians who are part of the West Philadelphia Skills Initiative alumni network.” Once someone graduates from the program, they aren’t left on their own–graduates can take advantage of six months of coaching, and many have stayed connected to the programs for years after their graduation.

She makes it clear that the Skills Initiative is not a charity. “We provide the tools for people, but we’re not trying to fix their lives. If participants choose to be somewhere different, then we offer resources, techniques, insight, and awareness that may help you get to where you need to go. That’s your choice as an adult. My mother used to say, ‘You’re right where you’re supposed to be until you decide to be someplace different.’ Our job is to provide the jobs for people who say they want to be in a different place.”

For the participants who dedicate themselves to putting in the work that the program requires, the experience can be life-changing. Over the years we’ve collected hundreds of testimonials from participants who talk about how transformative the Skills Initiative has been for them. Take Justin Bradley, for example: Justin joined a landscape program after being unemployed for nearly 18 months. He made such a good impression that we asked him to join Community Porch Revitalization (CPR), UCD’s pilot program focused on training people for jobs in the skilled trades. The CPR cohort learned carpentry skills in the classroom and workshop, and then put their skills to use by building a porch for a community member; Justin’s leadership and work ethic set a positive example for the program participants.

After completing the CPR program, Justin was hired onto our Green City Works landscape crew and has been working in a full-time position for nearly a year. He continues to serve as a leader and positive example of how WPSI can help unlock career opportunities for talented local residents.

The Skills Initiative has come a long way from its humble beginnings, and has proven to be a tremendous benefit to both the institutions and the community. “Both sides have been pleasantly surprised,” Sheila says. “The West Philadelphia community has been wowed by the institutional commitment to this program. And then on the employer side of the fence, the employers are blown away by the level of talent that is literally in their backyard.”

“It’s been wonderful,” Matt says. Eight years after helping launch the Skills Initiative, he remains passionate and engaged, and treasures his chances to speak to cohorts during their first week of training. “I like to share with them the very first document I can find about the Skills Initiative. It’s got a vision statement on what we hoped we can be. Now almost eight years since that document, we are very true to that vision of connecting people in the neighborhood seeking opportunity to employers and anchor institutions seeking talent. I never could have imagined the human impact we would have, and the scale that’s beginning to take hold block-by-block, and neighborhood by neighborhood as people connect to work. That’s the real power of the Skills Initiative.”

To learn more about the Skills Initiative, visit https://www.universitycity.org/wpsi. There you can view more videos featuring Skills Initiative graduates, read our 2016 Impact Report, or see what current job opportunities are available.